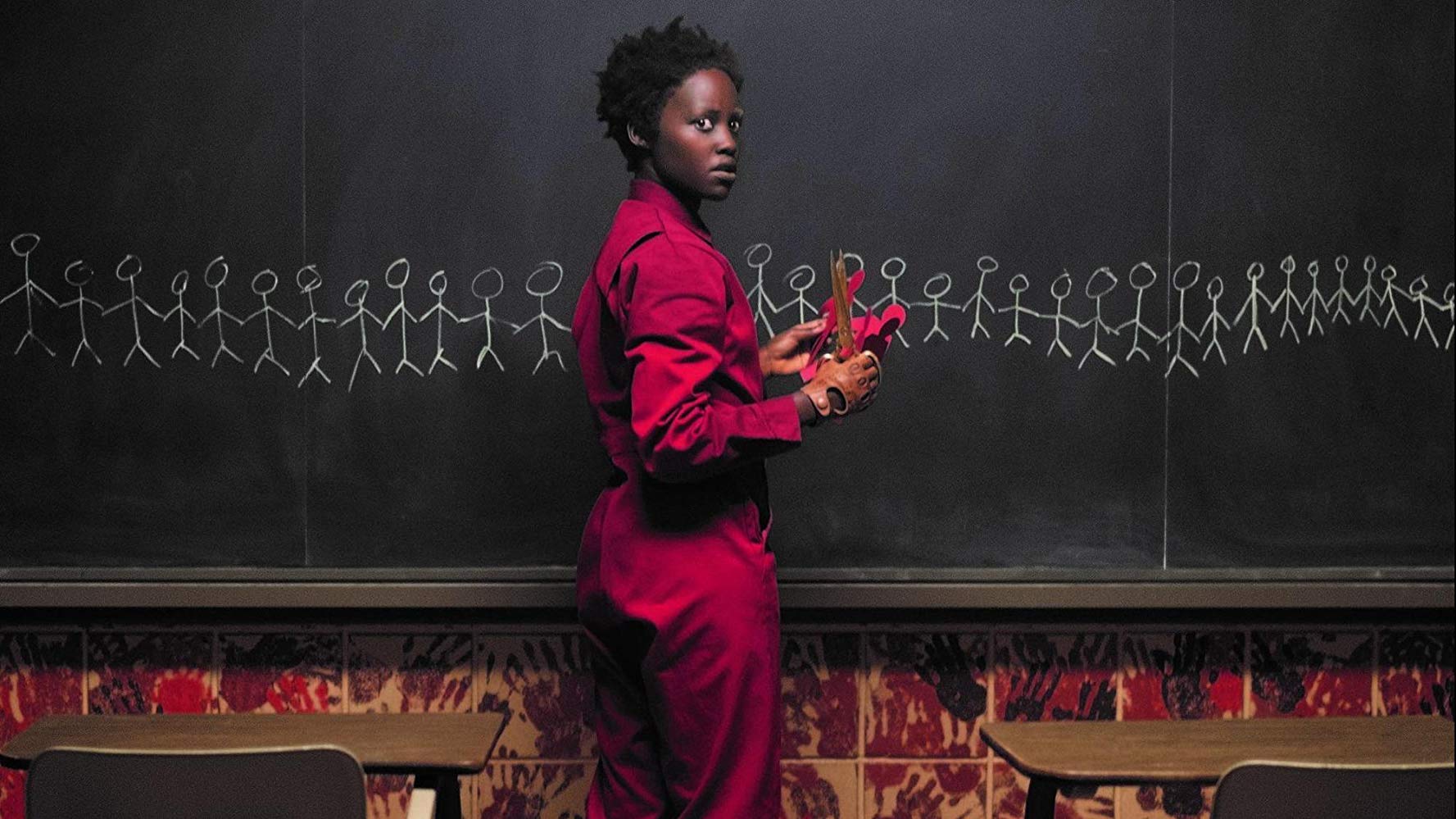 Continue at your own risk.

The prophet Isaiah prophesied, “Your dead will come back to life; your corpses will rise up. Wake up and shout joyfully, you who live in the ground! For you will grow like plants drenched with the morning dew, and the earth will bring forth its dead spirits” (Is 26:19-21).[1]  Isaiah referred to the Messiah of the world with the implication that the dead in sin would rise into new life in the Christ. Writer, producer, and director Jordan Peele uses Biblical references throughout his film and draws upon passages like this one to tell of the rise of the Us world’s Messiah—Red.

Peele explains in an interview with George Harrison on the Empire podcast that Us takes on a ‘dark Easter’ theme. The film portrays the “rising of a messiah after a metaphorical death. A declaration to the world.”[2] Christians celebrate Easter as the third day after Christ’s death when he rose back to life. A “dark Easter” implies the rising of evil back to life.

Young Adelaide (Madison Curry) experiences a terrifying encounter in a house of mirrors where she literally bumps into her doppelganger. Memories of that meeting haunt her into adulthood. In the present-day, Adelaide (Lupita Nyong’o) and her family of four reach Santa Cruz, CA to rest and enjoy a family vacation at the beach. It gets cut short when an identical family of four wearing red jumpsuits and carrying golden shears shows up in the middle of the night at the edge of their driveway. Carnage ensues.

Adelaide ominously reunites with her doppelganger, Red. Adelaide and Red (both played by Lupita Nyong’o) act against each other as protagonist and antagonist. Adelaide represents the good guy and Red is the bad guy. Red sits cross-legged on a chair illuminated by the crackling fire in the fireplace. She proceeds to speak to Adelaide through a strangled and broken voice and says, “humans created the Tethered to control the people above.” But instead, the Tethered acted only as mere puppets—void of their own lives, pulled on by forces above and beyond themselves.

The “metaphorical death” that Peele describes in the interview alludes to the kidnapping of Adelaide as a child. At the end of the film, we learn that child-Red choked and dragged child-Adelaide into the beige-tiled Underpass and left her handcuffed to a cold steel bunk bed frame. Child-Red assumes the place above ground as Adelaide. The girl trapped below grows into Red, the shadow and future Messiah—evil rises above.

In the Underpass, soon after the switch, the Tethers quickly realize that Red existed to save them from their incarceration. Peele says, “the Tethered have complete faith in their messiah.” Red during her time below as a child had seen a vision given to her by “God” that she must rise and free the Tethered from their imprisonment in the darkness. Back in the present, Red tells Adelaide in the strained broken voice, “the shadow hated the girl so much for so long until one day the shadow realized she was being tested by God.”

Red plans the usurpation of power from the people above ground. Tethers appear on the surface and with only their golden shears to brutally murder their doppelgangers. Red establishes Tether domination and freedom by orchestrating a human chain of red-jumpsuited-Tethers spanning hand in hand from coast to coast. But before she can see the domination, Adelaide kills Red in the Underground by Red’s own chain. Red, martyred for her own cause.

The family of four escapes Santa Cruz roughly intact. As Adelaide drives the ambulance away from the city with her family, she looks over at her son Jason and offers him a wry smile. Apprehensive by Adelaide’s gesture, Jason covers his face with his mask. The film ends ambiguously with the Tethers lined up across the United States through city, ocean, and wilderness.

Radha pursues a ThM at Dallas Theological Seminary studying the intersections of theology, art, and film. She consumes a wide range of activities ranging from photography, rock climbing, and horror stories. She lives in Fort Worth, TX and travels to the great outdoors with her camera. Follow her adventures on Twitter and instagram.

Radha is a grad student at Dallas Theological Seminary with an emphasis in film, culture, and apologetics. She writes, photographs, and studies theology. You can find her on twitter @kungfucurry and instagram @firestripe View all posts by firestripe