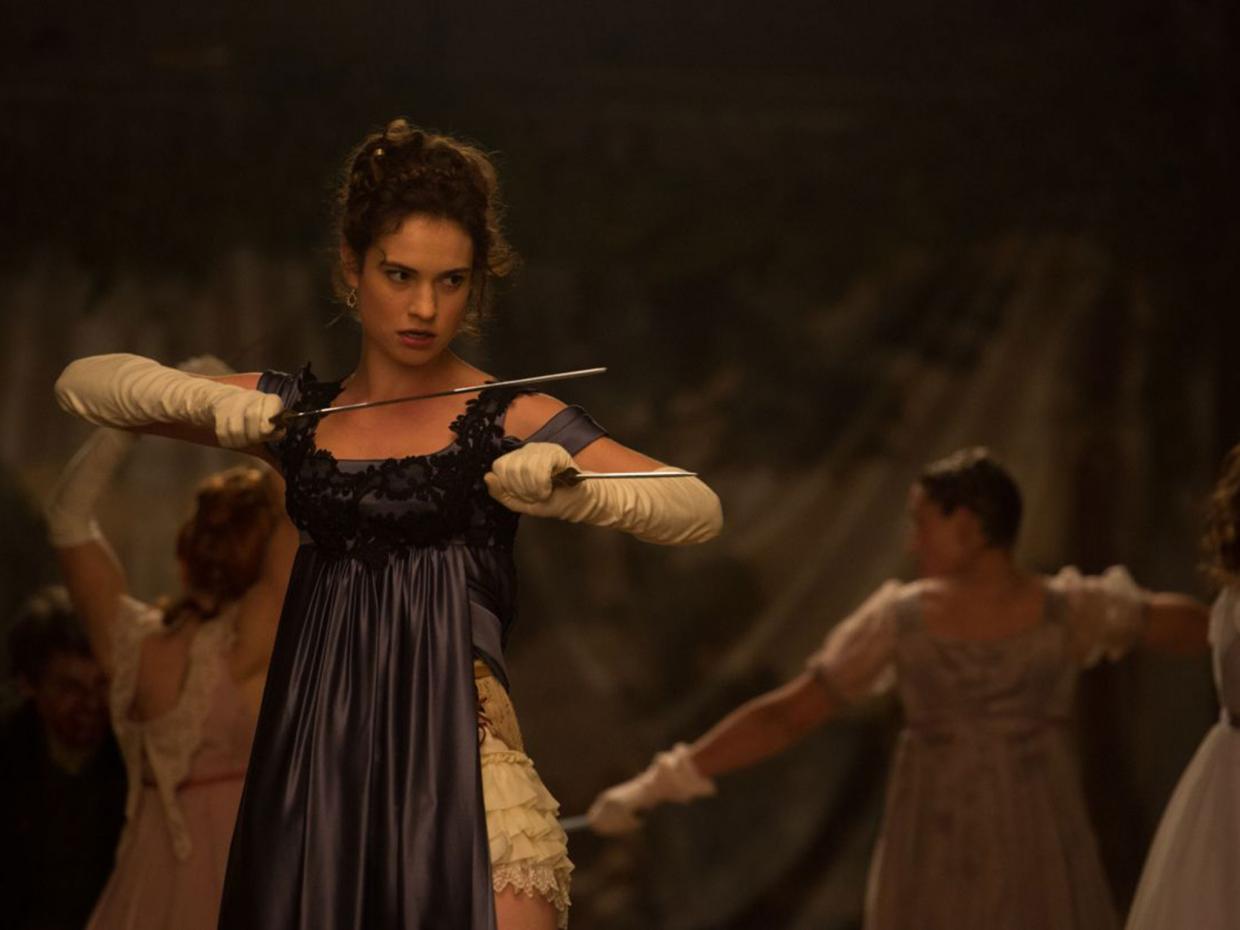 Seth Grahame-Smith shocked the world in 2009 when he ‘co-authored’ Pride and Prejudice and Zombies. Taking Jane Austin’s beloved classic Pride and Prejudice, he transformed that ‘masterpiece of world literature into something you’d actually want to read’ (back cover). Basically, Grahame-Smith reworked the entire novel to include the ‘unmentionables’ (zombies) and ‘oriental arts’ (kung fu) thus either making the book palatable or ruining it, depending on who you ask.

Whatever critics thought, Grahame-Smith’s pioneering spawned an entire genre of mash-up horror fiction, mostly with pun-tacular titles: Sense and Sensibility and Sea Monsters, Jane Slayre, Alice in Zombieland, The Vampire Count of Monte Cristo, and my personal favourite The Meowmorphosis. The list goes on, and on, and on. The trend has even moved into non-English literature. Sissi, die Vampirjägerin: Scheusalsjahre einer Kaiserin reframes Austrian princess Sissi as a vampire hunter, and Max Havelaar met Zombies shares the horror of the zombie plague in Dutch Indonesia.

These mashup horror books are true, in varying degrees, to their originals. Pride and Prejudice and Zombies famously begins with ‘it is a truth universally acknowledged that a zombie in possession of brains must be in want of more brains.’ Thus immediately showing the shift from Austin’s matrimony theme, to the no more horrific theme of zombies. This respect for the source work cannot be claimed of the movie however. Yes, the 2016 film adaptation Pride + Prejudice + Zombies sets the tone in the same way with the same opening line, but soon the paths diverge very strongly.

I would imagine that when filming a mashup novel, there would be two great choices; neither of which writer and director Burr Steers chose. The film could either attempt to film the narrative of the mashup book (the boring choice) or the film could remain close to the genre and mashup one of the scores of Pride and Prejudice adaptations. Steers chose to heavily edit the plot, making some baffling choices along the way (including paradoxically disempowering women by making them zombie slaying, gun-toting, shaolin masters). But… those baffling choices are exactly what I am interested in. For some reason, Steers chooses to introduce the four riders of the apocalypse, Revelation, porcine theophagy, and the zombie apocalypse into the narrative. In their film adaptation of a mashup adaptation of a regency novel, they introduce adaptations of the Bible… because… reasons?

The film’s visual highlight is its introductory narration and accompanying animation. In an amazingly beautiful and period-appropriate animation the background of the ‘virulent and abominable plague’ is told by Mr Bennet to his daughters. Undead rose by the millions, and ‘even the four horsemen of the apocalypse are said to have ascended from hell.’ An innocent enough turn of phrase, were it not that this seems to be exactly what has happened. Three times in the film we will see the four zombie horsemen of the apocalypse. Sadly this intriguing reading of Revelation 6 seems to have ended up on the cutting room floor, as references abound but nothing is developed.

Fortunately, though the horsemen are missing, about an hour in the theology of Pride + Prejudice + Zombies hits full swing. Lizzie Bennet (running through the forest to avoid the matrimonial desires of Parson Collins) sees four dark figures in top hats. At that exact moment she ‘just happens’ to run into Lieutenant Wickham, who she sees as an amorous alternative to the dark and broody Mr Darcy. He convinces her that they are probably just pallbearers, and immediately takes her to see something very special. A secret place he has never shown another living soul (pun most definitely intended). This place was his destiny, and he wishes to share it with her.

He takes her to a church, the Church of St Lazarus (once again, theological pun intended). Lizzie enters and sits down to hear the minister, quoting a collection of Bible passages, which seem to be edited versions of the King James Version.

And I brought your fathers out of Egypt: and ye came unto the sea; and the Egyptians crowded their fathers with chariots and horsemen to the Red sea. And when they cried unto the LORD, he put darkness between you and the Egyptians, and brought this upon them. (Joshua 26:6-7)

As the preacher says ‘Lazarus, come out,’ the audience recite that line with him, and Lizzie realises that the church is full of ‘the stricken.’

This revelation should not come as much of a shock, seeing the name of the church and the Bible passages read above. Clearly though in no way related, these three texts tell the story of the zombie plague. It remains a bit unclear to me if the zombies identify with Israel (i.e. the Lord is on their side) or with Egypt (i.e. they are the masses crowding the uninfected), but the other two show a biblical precedent for the undead. A true believer may seem dead, but they live—just like these zombies! They are all Lazarites, risen from the dead through the power of Christ.

The church service continues with the eucharist, which fittingly is not bread and wine but brains and blood. The eucharist is introduced, not with the usual words of eating Christ’s body, but with a collection of passages about the nature of locusts (Proverbs 30:27, Joel 1:5). Locusts are organised without leaders and locusts devour everything. As such they are a model for the egalitarian zombie hordes. A bit of a non sequitur, but the image becomes important later.

Lizzie is thus introduced to the solution to the zombie plague: Christian ‘vegetarian’ zombies. Wickham is attempting to broker peace. Later, Lizzie explains what is going on: ‘some of the stricken have not succumbed to the urge to feed upon the living.’ They are ‘fortified by piety.’ In other words, these pious fellows partake not of human brains, but of pig’s brains which they eat as the body of Christ. In the experience of porcine theophagy, they avoid losing their humanity. Believing in Christ they are somehow saved from death.

Opiate of the Masses

Steers has chosen to introduce a Christian theme into this adaptation. As Grahame-Smith mashed together zombies, ninjas and Jane Austin, Steers mashes various biblical passages to create a ‘zombology’. Dead is by no means dead, Christ rose the first zombie Lazarus, and rose others as well. They are leaderless devouring locusts.

Christian zombies is a new take that I cannot remember seeing before. But, Steers does not mashup the Bible as well as Grahame-Smith mashes up Jane Austin. It seems that Steers cannot get past the idea of Christianity as, to use Marx’s words, the opiate of the masses—in the most literal sense. The horde of zombies, a mass par excellence, needs Christianity to fool themselves into remaining sane. The Christian zombies are distrusted (I will admit for admittedly good reasons, they are after all zombies), but they are also sarcastically derided for their Christianity. The narrative is obvious: everyone knows that it is not their faith that is keeping them human, it is the pig’s brains they are eating. Their faith remains a silly lie that they believe.

The other overtly biblical theme is also rather poorly developed, yet holds great promise. The leaderless locusts turn out to have leaders after all. It becomes clear that there is an entire leadership structure to the zombies: the brainless are led by the Christians, the Christians by the Anti-Christ himself. From a class politics point-of-view Steers develops this all rather well, it is obvious that the upper class non-infected do not care about the mindless hordes of locusts—leader or no leader. As far as they are concerned, the best zombie is a dead zombie and these masses are not worth saving.

In fact the uninfected seem to simply be wholly terrible people… maybe God is on the zombies’ side after all.

Theological expert Parson Collins, who is without doubt the best character in the film, attempts to help us understand zombie leadership. When he hears someone say that locusts have no leaders, he disagrees. ‘Oh, um, expect one actually. Oh, well, um, according to the Book of Revelation, actually, the Anti-Christ shall lead the undead on the day that shall be last day of mankind.’ He’s referring to Revelation 9:1-11, the sounding of the fifth trumpet. This trumpet describes the fall of some terrible evil and the rise of locusts. These locusts are commanded by a king, the fallen angel of the pit, called Abaddon or Apollyon. He must be the zombie Anti-Christ!

The identity of the zombie antichrist remains unrevealed until the very end: it was lieutenant Wickham all along. His attempts to explain zombie Christianity to Lizzie was an attempt to create peace. He played the role of an uninfected in the hope to save, not his zombies, but the humans. Hilariously, in retrospect, it was him that warned them what would happen if the zombies ‘find their Anti-Christ’: ‘the human race is surely doomed.’

Wickham thus plays a theologically interesting role. While he is identified as the fallen angel of the pit and the Anti-Christ, he actually plays the role of Messiah. His mission is not to destroy humanity, but to save it. He wishes to create peace between his Christian zombie horde and the uninfected. And when that fails, he turns to curses. He tells Mr Darcy ‘Please do remember this moment, and the opportunity so glibly spurned. The day of the zombie is already broken.’

Humanity’s fate it turns out depends on the Antichrist, who is giving them a final chance. A chance that they squander.